Recent exploration on Regency Silver’s Dios Padre property reveals as much as 22.5 million tonnes of raw ore, with gold at grades as high as 53.5 g/t.

Assay results reveal as much as 71% more gold than other world-class discoveries. That’s on top of sizable grades of copper and silver.

Regency Silver (TSXV: RSMX, OTC: RSMXF) is a Canadian exploration company with assets situated in the state of Sonora in northern Mexico.

Led by Mexico mining industry veteran Bruce Bragagnolo, the company controls a property called Dios Padre, which contains a legacy silver mining operation and is comprised of three contiguous concessions and one nearby concession covering an area of 728 hectares. Regency has also optioned an adjacent 5,700 hectares property package.

Bragagnolo’s interest in the property was piqued by the presence of an Induced Polarization (IP) anomaly discovered by a previous option holder who had failed to find mineralization.

Armed with a fresh perspective, a better understanding of the data obtained from previous option holders, and strong regional knowledge, Bragagnolo was able to knock it out of the park with one swing, with the first drill hole intercepting a very rich structure containing 4.7 g/t of gold. 0.67% copper and 23 g/t silver over 53.8m, including 6.84 g/t gold, 0.88% copper and 21.8 g/t of silver over 36m, and as much as 14 g/t of gold deeper down hole.

From a value perspective, these results are light years away from the legacy silver operations at Dios

Padre, pointing towards a much richer, far more monetizable resource at depth. That was sufficient

evidence to warrant early exercise of Regency’s option on the Dios Padre property in October.

And moreover, it fueled a subsequent C$2.16M oversubscribed private placement that fully funded an

expanded step-out drilling program to begin on January 9th, 2023, as well as a second IP study intended to follow the structure to increased depth that will commence the following day.

A Centuries-Old History of Production

Silver mining at Dios Padre dates back centuries to the 1600s when silver nuggets were literally picked off the surface.

“The earliest known mining activities [at Dios Padre] were carried out by the Jesuits in the 17th century using Yaqui labor. Their operations occurred between 1603 and 1650.”

By the time that the Yaquis expelled the Jesuits, “The[y] were estimated to have mined 7,000 tonnes of rich silver ore from narrow, near-surface veins.”

No records of silver recovery are mentioned for another two centuries at which point Lunceford and Gibson state,

“The Dios Padre mine was brought into production again in 1860…yielding approximately 16 million ounces of silver, resulting in a calculated mine grade of 25 ounces per ton.”

A handful of different parties would sporadically mine the deposit using various methods over the next two centuries, enduring the Mexican Revolution, the Spanish American War and two World Wars, until it was acquired by the Dallas-based Kennemur family in the mid-20th century.

The Kennemurs mined Dios Padre on a small scale for several years. Although the ore was of solid grade, and the structure rather large – as much as sixty feet high in some places – low silver prices in the $2-4/tr. oz. range kept margins thin, and ultimately the property was optioned to Silver Standard in 1996.

Although Silver Standard liked the property, they failed to find an obvious extension of the existing

deposit, as evidenced by the view below depicting the existing mine works alongside historical drill holes.

Ultimately, this prevented the company from defining a resource of sufficient size (20 million ounces or

more) to warrant significant further investment in exploration, and eventually the project was optioned by First Majestic.

While First Majestic drilled some very high-grade holes, they were also unable to find an extension and

faced with the same US$6 million option payment, the company also handed the property back before

getting in too deep from a financial perspective.

Next in line for the option on the property was NSX Silver, who to their credit took a slightly different

approach to exploration than their predecessors. To better delineate the asset’s geophysical

characteristics, the company ran an induced polarization (IP) survey, initially starting on the old mine

works and eventually encompassing the entire claim block. The result of these efforts was a very

interesting IP anomaly centered roughly 550 meters north of the existing mine, outlined in the picture 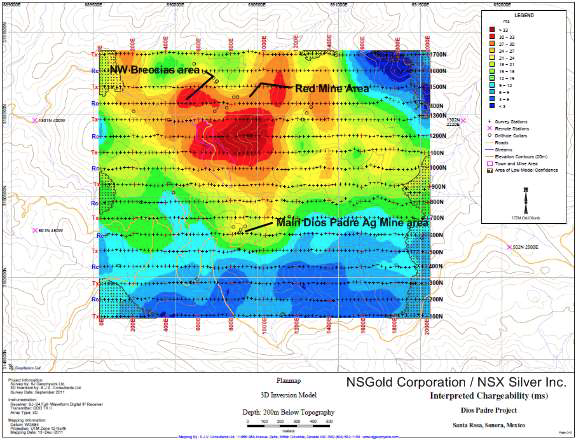 At the time, NSX thought Dios Padre might be a rhyolite plug with veined breccia on the inside. And

accordingly, they obviously regarded the IP anomaly as an opportunity to further define the silver

resource, and drilled three holes in the area, including one right through the center of the high amplitude anomaly.

Unfortunately, results were less than stellar, silver prices began to fall rapidly from their post-GFC peaks,

and the $6 million option payment proved too expensive to hold, forcing NSX to give the

Once silver prices established a bottom along with the rest of the natural resource complex in late 2015/early 2016, however, interest began to renew.

In particular, Dios Padre’s combination of large existing mine works and the new IP anomaly caught the attention of Bruce Bragagnolo – a longtime mining executive with extensive experience in Mexico – who picked the property up for his new venture, Regency Silver.

Over time, Bragagnolo came to believe that whatever structure lay underneath the IP anomaly, it likely

fed the existing mine.

However, its significantly higher resistivity suggested the mineralization was copper-gold focused rather than silver. And furthermore, it was clear that since the existing mine deposit dipped at roughly a 45-degree angle to the north, drilling back through the anomaly at a 45-degree angle back toward the mine – and at depth – had the greatest chance of success at finding the deposit’s extension.

Regency took all the information from the previous option holders, had it reprocessed using the latest in

modern software and produced a much clearer picture of the exploration priorities. Regency prepared to execute this plan in early 2022, which proved to be a major success.

depth down hole. The hole ended in mineralization and was stopped due to the 500m maximum capacity of the drill rig.

Assuming reasonable continuity to the east and west, and a specific gravity of 2.5-2.8 t/m, there is the

But perhaps more importantly, the structure and composition of drilling

samples imply this part of the deposit to be a solution-collapse breccia, which in turn suggests the

existence of a nearby high-grade porphyry at depth on the property.

Regency successfully completed a C$2.16M capital raise in December 2022, the proceeds for which will

be used to complete an infill drilling program and supplemental IP study set to begin on January 9-10,

2023, that is intended to better define the contained resource at significantly deeper levels, down to 800 meters.

A Steady Hand Guides the Company

Chairman of Regency Silver, Bruce Bragagnolo. Mr. Bragagnolo grew up in Timmins, Ontario, in the heart

of the Canadian mining industry, having worked his summers in the Kidd Creek copper/zinc/silver mine

(now owned and operated by Glencore) as a young man. Upon completing law school at the University of British Columbia, the newly minted attorney returned to the mining industry, this time with a focus on securities law. That background and experience eventually led him to form a company, Continuum

Resources, which led him to Mexico as the majority owner of the San Jose Mine in the State of Oaxaca.

Not long after merging Continuum with Fortuna Resources in 2004, Bragagnolo acquired the San

Francisco Mine in Northern Sonora, which he eventually took public as Timmins Gold, growing from an

IPO market cap of C$7M to a peak of C$475M in 2012. Similarly, he took Silvermex Resources public

which eventually acquired the La Guitarra mine, raising the market cap from an initial value of just C$5M

deep knowledge and expertise granted by those opportunities.

During the course of his tenure, he visited many properties and mines and learned valuable lessons from each one. Nearly twenty years in the mining business had transformed the young securities attorney into an expert on both Mexican geology and the Mexican legal system… and a well-connected one at that.

One of those connections made along that journey was Dr. Francisco Cordova, who has had an extensive

career in the Mexican government for over 22 years. Dr. Cordova has acted as the Coordinator of Special

Sinaloa, and the Secretary of Agrarian Reform for the Mexican Federal Government.

After receiving his doctorate in law from Arizona State University in 1992, the US Army veteran served in

several positions before becoming the nominee director for the vendor of the San Francisco mine. Dr.

It is worth reiterating that RSMX is not looking for a new zone, a higher grade, or width. Rather, they

are simply looking for a continuation or extension of what has been discovered to date.

More importantly, now that mineralization has been proven to extend to the north, dipping down at a 45-degree angle toward richer precious metals content, the opportunity to determine the entire property’s true intrinsic value can begin in earnest.

In a phrase, this represents an opportunity to pay for the silver, and get the gold for free.

What Is Next For Gold, Silver, And Stocks As They Soared...

US is spending record amounts servicing its national debt – interest...

How a Massachusetts Town Seized a Farmer’s $370k Property to Cover...