I’ve been in this sector long enough to know this fear isn’t anything new.

Various and different characters, most of whom have a dubious track record, have been pushing this narrative as far back as the early 2000s.

Those purporting this view maintain a religious conviction despite any new evidence that disproves it.

The only time this fear was justified was in 2007 and perhaps right before the Covid crash, which was a Black Swan event and reversed course completely within weeks.

The market did crash in 2008, and Gold and gold stocks did as well. The crash narrative was dead-on due to the understanding of the mortgage and housing markets’ problems, which would spread.

Before we assess the current situation, we should point out that every crash and bear market is different and that crash declines are rather infrequent.

If a crash or bear market lies in our immediate future, one historical template could be the 1987-1990 period.

Much like in 2020, the stock market crashed in 1987 but recovered quickly, albeit nowhere as fast as in 2020. However, there wasn’t a recession in 1987. That, and a mild bear market followed three years after the crash.

A significant crash or bear market (on the scale of 1929, 1937, and 2007) requires a preceding economic expansion, Fed tightening, and issues in the banking system.

That is not the case today as the Fed remains accommodative, and the banks were recapitalized after the last crisis. Moreover, household balance sheets are in a much better position than in 2007, and the explosion in debt is on the government side and non-financial corporate side.

Today, there is a speculative bubble concentrated in the technology sector, and speculation due to cheap money and the democratization of finance has bled into other areas like crypto. Also, valuations are off the charts, and therefore expected returns are extremely low.

With the Fed remaining accommodative, more free money coming from Uncle Sam, and the business cycle turning up, the probability of a crash this year is low. However, a sharp correction and a partial unwinding of some of this newbie speculation are quite possible.

If current trends continue, the next bear market template could be the early 2000s technology bust or the inflationary recession of 1973-1974, which followed only three years of expansion.

By the way, these were the 4th and 5th worst bear markets on record (after the three crashes mentioned above) and Gold and Gold stocks diverged and performed fabulously during both. 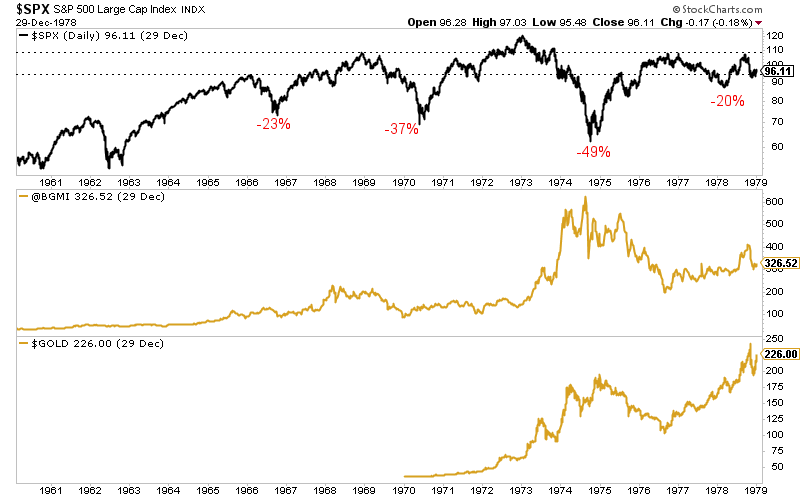 Circling back to the present, I want to touch on the potential for a sharp correction in the equity market (15% to 20%) and the impact on precious metals.

Over the past six months, precious metals have corrected as they should have. They had an amazing, record-breaking run last spring and summer and a sustained correction was to be expected.

During that period, investment capital and hot money have flowed into just about everything else.

The S&P 500 is up nearly 20%. The CRB index is up 25%. Bitcoin has gone parabolic. Gold and Bonds have performed the worst, and that is during a slight decline in the dollar. 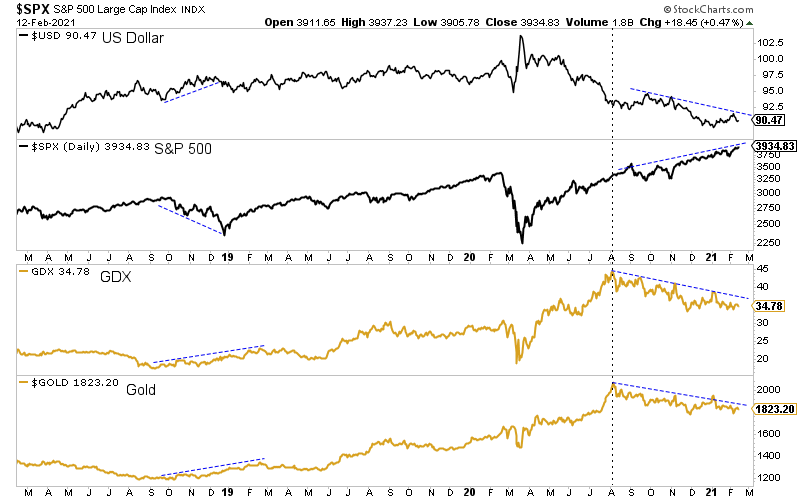 Let’s assume there is a 20% decline in the stock market, and capital flows back into Bonds and the US Dollar.

How is that going to be a negative for Gold and gold stocks when they have declined during a period of hot money inflows into everything else?

Instead, it is more likely to be a major catalyst for Gold and gold stocks.

For Gold to make that next big breakout and move towards $3,000/oz, it will need to outperform the stock market.

The chart below shows Gold and gold stocks relative to Gold have been trading in a large bottoming pattern since 2014.

The next sharp correction or bear market in stocks is likely to set up the next vertical move in precious metals. 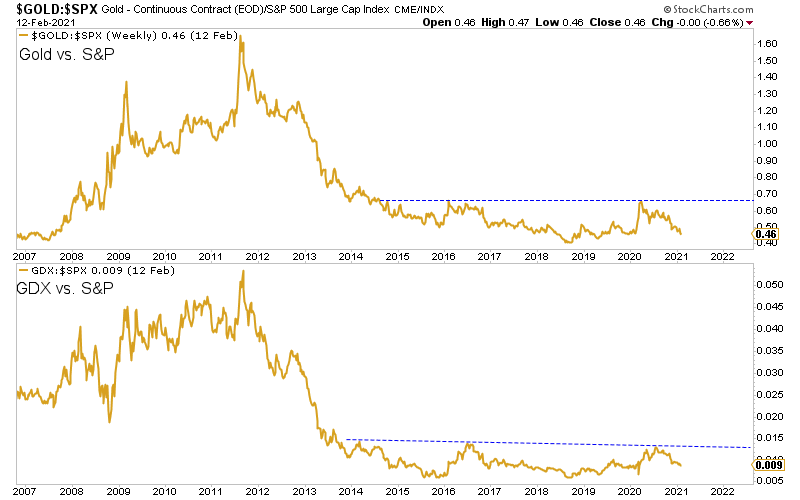 The preconditions for a crash or major bear market in stocks are not in place yet, but stocks’ outlook over the next decade is terrible.

If the next bear market is inflationary, precious metals will diverge and perform well.

There is the risk of a sharp correction in stocks this year, but Gold and gold stocks do not share in that risk because they have diverged since last August 2020. Investment capital and hot money have left the sector.

A sharp correction in stocks and other risk assets may be needed to put precious metals in position for the next breakout and impulsive advance. Gold and gold stocks could sell off a bit but would reverse well before the end of the correction.

If you remain worried about a crash driving down precious metals, but you want to stay invested, here is what I would do.

Avoid optionality plays and avoid silver stocks. These would get hit the most.

Focus on high-quality juniors. This does not mean the largest or the safest. For me, it means companies with the best combination of fundamental quality and upside potential. These stocks would be the first to rocket back after a correction.

Besides, you buy when there is value, and the market is trading around a bottom like now.

I did not receive multiple emails about a crash last summer. I did after gold stocks corrected 27%. Funny how that works.

This year’s goal is to accumulate high-quality juniors to put yourself in a position to capitalize on the next big breakout, which would take Gold from nearly $2,100 towards $3,000.

The post Should Gold Bulls Worry About a Market Crash? appeared first on The Daily Gold.

Source: Should Gold Bulls Worry About a Market Crash?